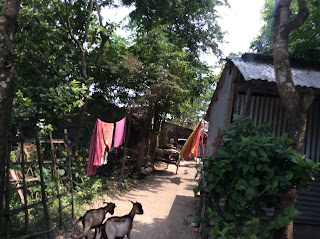 Today began our second week of heading out to the school. After a delicious breakfast at the hotel and an hour and a half of waiting for a taxi that never came, we took a car from the hotel and began our journey to the school, filled once again with stubborn cows and goats. 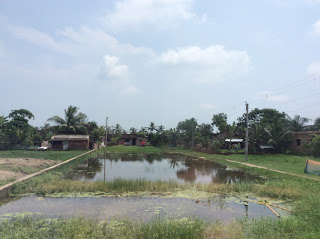 When we arrived we were greeted with a nice cool cup of water and a hot cup of chai tea. Then Maria, Libby, Sonia, and myself began to teach the girls in Class 3 and Class 7 using new books and introducing them to some new vocabulary. 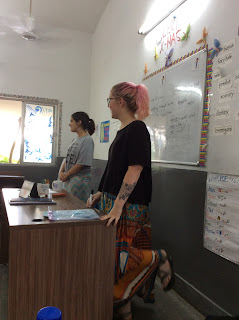 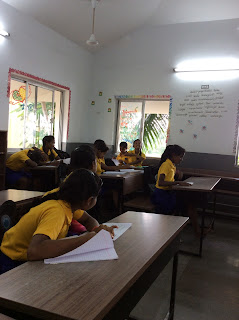 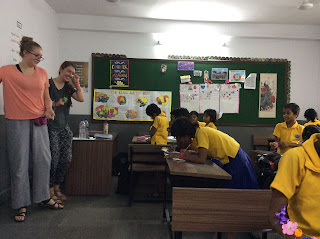 After that, we again ate lunch with the teachers and then moved on to meeting with the older girls in Classes 9-12. With the older girls we read the story of Mulan and discussed how awesome it was that she was the hero in the story and showed her culture that women can do anything. The girls then shared stories of times that they accomplished something. It was truly inspiring to see the pride they had in what they had done and so willing to share it with us.

Then Pastor Luther gave his fourth lecture on comparative religions with the teachers, which the rest of us were unable to attend. Instead we went and sat in on the after school dance class. Then we all came back together and headed back to the hotel.

Today was Hindu festival called Raksha Babdhan, or Rahki, in which the sister goes to the brother and ties a sort of bracelet around his wrist symbolizing the brothers vow to protect the sister and look after her. This can also be seen as a bond of protection among friends. 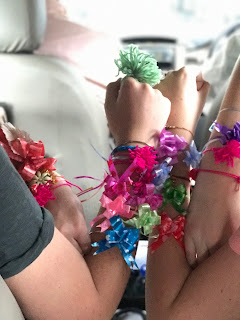 Throughout the day, several of the girls came up to us and tied bracelets around our wrists. It was an incredibly sweet and a wonderful reminder on the impact that we are having in each other's lives.
That's all for now.
Lizzie

Sent from my iPhone
Posted by Incarnation Youth at 5:20 AM