Well, it was a busy week for the "Dream Team"--a name given to us by our new friend, who we now refer to as The Friendly Doctor (mostly because we struggle to pronounce his real name…but also because he has a disposition like rainbows and sunshine). Our painting in the hospital was finished, and the Dispensary looked shiny and new with a fresh coat of paint and a new layer of gravel all around, so we had to find new work to do during our last week in Ngoundere. 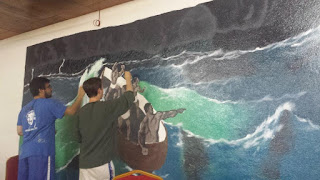 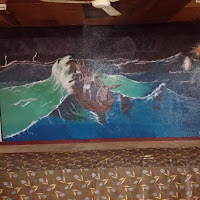 Scott and Elias were commissioned to create a mural on the wall of the church office on the station. Over the last few days, the boys, with the help of Catie, worked hard (despite the paint fumes) to create a beautiful scene depicting Matthew chapter 14, verse 27. And boy, is that wall a sight to see!

In that time, Catie and Maria interviewed quite a few of our Cameroonian brothers and sisters in order to determine how the church and its many institutions here work, and how our congregation, from all the way in California, can best be of help. Some of the interviewees include a retired nurse of the Protestant hospital, an educator in the Protestant school, a young student hoping to study in seminary, the Bishop, The Friendly Doctor himself, and more! We won’t give away too much, as we hope to have a video ready soon to show everyone.

Meanwhile, with the help of the congregation, Pastor Luther was able to distribute scholarships to families, helping more than 60 children to attend school! With all this good work being done--though it never feels like quite enough--it was already time to leave.

On Friday, the Dream Team packed up and said many hard goodbyes before heading to the airport, where we waited for the staff that were late to check us in, and then again for the plane, which was hours late to arrive. But, in the words of a taxi driver who once piled seven additional people into a 5-seated car, “C’est l’Afrique”—that’s Africa. Nothing ever happens quickly, or how you expect it to. 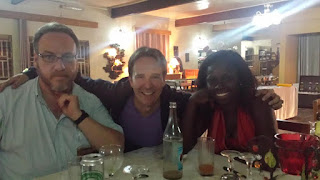 Eventually we got to Yaounde, and enjoyed some rest and hot chocolate at the hotel. And with an artist’s touch, Scott ripped the door handle clean off the door of his room. Literally. He has since vowed to relinquish all door-opening duties to Elias henceforth and forever more--and asked reception to please replace the handle. Other than that, we’re all doing quite well, and looking forward to a relaxing weekend at the Toungou hotel in the bustling city of Yaounde. And maybe to a few more cups of that hot chocolate. 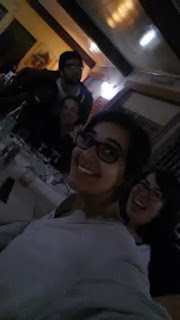 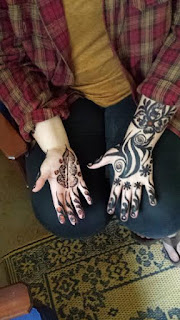 Posted by Incarnation Youth at 10:29 AM No comments:

Our Incarnation Lutheran group of five spent the first few days in Cameroon recovering from our long travels. Having arrived in Yaounde, we rested, reacquainted ourselves with the delicious pastries and instant coffee, and visited a lovely chicken farm a little ways out of the city. Then we packed up and started on our way to Ngaoundere--we only hit a few bumps throughout our travels (two travelers with the same boarding pass, having to avoid questionable airplane sandwiches, being ushered off the airplane in Douala only to be ushered back on to the same plane after a long, and probably unneeded wait, surviving the sweltering heat of the unnecessarily long preflight preparations, etc). But we eventually made it.

We arrived on the mission station to find some friendly faces, including our old friend Manu, who is now fifteen years old and much taller than we're comfortable admitting, and Sophie, who is just as lovely as ever. We are settled in nicely into a house across the street from Pastor Luther, who the children now call Papa (in reference to  his being a grandfatherly figure, which distresses him very much), and enjoying the surprisingly speedy wifi.

Our big project for this week will be to clean up the "dispensary" (waiting room area) of the Protestant Hospital, just outside the station. Our plans are to paint the entire area--a task which we have a good portion of completed--and to lay more gravel around the sitting area's benches. It is quite an adjustment for all of us to be working in such a small group in comparison to years past, but though we are small, we are mighty, and wield our paint rollers with the strength of an entire congregation. We have been lucky enough to make friends with some delightful staff at the hospital, including an extremely cheery surgeon who has  generously shared his consultation room with us, so that we might have a place to store our paint/supplies.

Our days here so far have been very productive, and we have a lot of exciting things  to look forward to on our schedules in the next week, including a visit to the pig farm, Saturday morning crepes with our quirky Canadian neighbors, and more!

But for now, we are all very thankful that after our long days of work, we can return to our house, tired and very much in need of a shower, but so happy to be home.

With love, hugs, and a cup of Necafe,

Pastor Luther [probably] approves this message
Posted by Incarnation Youth at 8:56 AM No comments: